Events for Christians has been through a number of changes since the original site was first developed by Fingermouse. The current version uses a slightly updated logo, which was designed by Fingermouse based on the previous colour scheme and also references Christian Connection, the partner organisation. 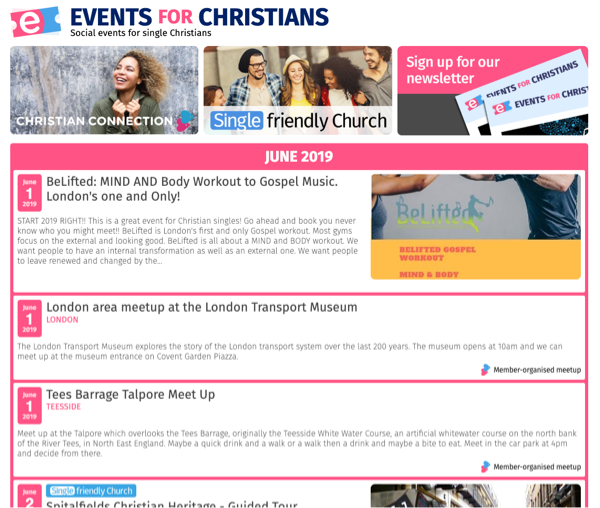 The website is built using Ruby on Rails and was originally intended as a simple aggregator, sourcing listings directly from Eventbrite, Christian Connection and Single Friendly Church using their APIs. Fingermouse developed a new meetup/events API for Christian Connection in order to provide event data to this independent site. Due to the slow response times of Eventbrite, though, the project was expanded to incorporate a database and cache, in order to provide a much faster combined response.

Instead of directly querying the various APIs in response to visitor requests, the system regularly looks up events in the background and updates the database as required. If listings are found to be out of date, the system automatically fetches more recent information. Event details are shown as overlays on top of the list in order to avoid page reloading, but standard forward/back interface functionality has been retained so that keyboard shortcuts and browser buttons still work as expected. The site code manually writes entries into the browser history so that users can bookmark specific events event if they only appeared in an overlay window.